Is it better to keep your clothes on or off in front of your children? Is it better to avoid your child when you are naked or, on the contrary, to treat nudity as the most natural thing in the world so that he does not develop curiosity at an older age? From what age is it appropriate to put the privacy barrier and lock the door of the toilet so that the little one will stop bursting in at any time? Is this barrier necessary from the beginning in the family?

It is difficult to find an answer to all these taboo questions. One thing is clear, there are two distinct sides: The one made of pudic parents who think that showing their undressed body to their children is unacceptable, and the one made of those who believe that exposing the naked body to children is in no way a shameful thing, but it can help the small ones develop a healthy relationship with their own body.

Should I wear clothes around my baby?

This is not about nudity itself as the main problem, but about the social implications and attitudes about nudity. The most important issue is to set clear limits, which means not to put your children in uncomfortable or inappropriate situations. There is a great difference, for example, between a child who sees his parent dressing to go to work and one who sees a parent who exposes or uses his or her nudity in a sexual manner. It is important, however, that the little one feels comfortable with his body and does not associate nudity with shame.

Naked in front of our children. What do the specialists say?

Anthropological studies show that nudity is perceived as shameful only when the society in which we live decides so. If we lived in the jungle of the Amazon region (or what remained of it), it would be a nonproblem because no one around us would have any issues with nudity. If we lived in the few European cultures where nudity is accepted, Germany, Austria, Scandinavia, we would not be embarrassed to go to the sauna or to the nudist beach with all the family and friends, regardless of age. And if we were living in the US, we would have to look quite a lot for a beach where we are allowed to go topless. This is how it works with nudity and society!

When I first gave a thought to this subject, I believed it would be simple to conclude that it is natural for parents to walk around undressed in front of their children, especially in the case of mothers when they have young children. But I must confess that by the time I published this material I did not find a common viewpoint among psychologists regarding natural nudity in front of children.

When I say natural, I refer to the common situations in family life, when parents get out of the shower wrapped in a tiny towel, or even naked, when the little ones come to their parents when they are on the toilet, or when the adults from the house are dressed loose, in their underwear.

There are diverse theories, voices that contradict each other on the same subject, naturists who are trying to bring to the fore the theory of healthy nudity, and psychoanalysts who say we should get out of the bathroom with an overcoat on us.

After reading theories over the theories, I should draw a conclusion: Family nudity is a normal and temporary stage as long as you respect your child’s evolution.

As long as the parents do not force the little one to accept their nudity, and the little one shows signs of feeling comfortable with it, there is no danger in developing complexes later in life.

Respect the bashfulness of children! Stages of development

The famous psychoanalyst Françoise Dolto (1908-1988), in one of her volumes talks, among other things, about the subject of parents’ nudity in front of the small ones.

Dolto has a moderate theory in this regard, also raising a few questions to parents who do not know what option to go for. She thinks that a more relaxed attitude, which prevails today, is much healthier for the sexuality of children.

Around the age of three, the child begins to be aware of his sexual character. The question that all parents ask themselves is whether they can appear naked in front of their children. She also says that until the child reaches six years old, a very liberal policy is desirable in terms of nudity around the house. After the child turns six things should change. 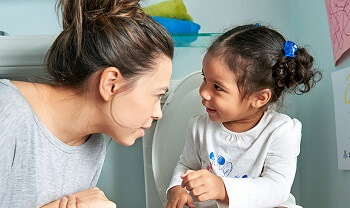 Typically, until the age of seven or eight, children show a kind of pudity that parents should encourage. At this age, the child might ask that the bathroom door be locked when showering. You should then respect his right to privacy. From this point on, parents should be careful and well covered when they are around their children. It is not a question of making him excessively pudic or exhibitionist. If mothers want to tan topless on the beach, they must assure themselves that the child doesn’t mind it. If they burst into your room rudely while you get dressed, do not tell them to get out. If they feel embarrassed, they will get out of the room on their own.

After the age of 12, the teenager will no longer appear naked in front of his parents, nor will he accept you to do it. The redness comes into their cheeks, the feeling of the pudity – a normal stage in his development.

But also, Dolto insists that, from an age, children can feel complexed in the presence of an undressed adult. Children are very proud of the body of their parents. For them, their parents are always perfect in their nudity, as in all else. But there are periods in the child’s life where he does not notice everything.

You can also read my article about whether or not you should eat grapes during pregnancy.

When the child is a toddler, he does not notice sexual organs, for instance. He really notices the body only as soon as he realizes the sexual difference (and not merely sexual), but the difference between the types of bodies.

Adults must know, for example, that a child between eighteen months and two and a half years has no sense of volume and difference at all. The moment when they perceive the differences is very important because from that moment on, the structure of reality begins. At that age, the difference in volume represents different degrees of beauty for a child. For them, what is great is better than what is small, and he may feel inferior to adults, although at that point, in the level of verbal development he is as good as they are.

So, in the question of parents’ nudity, the key is moderation!

Five tips for both dressed and undressed types of parents!

Does it make a difference if the child is a boy or a girl?

The majority of parents walk around their kids partially dressed. Another thing that matters is the child’s gender. Many dads say that they have no restraint in taking off their clothes in front of their little ones, regardless of the child’s gender, but only as far as the underwear. Mothers, however, take into account the child’s sex. They get undressed in front of both, but when it comes to the boy they turn their back.

We can talk about a baby’s shyness rather than the parent’s. The children whose parents get undressed in front of them are also in two different situations. The girls stay when mothers get changed and when fathers do, they go out of the room. The boys do not look when their parents change.

It is certain that there are parents who walk around totally naked and some that do not take them off in front of their children. The child does not perceive the human body, nudity, and sexuality as an adult. He is more vulnerable, so it is best for the parents to take caution in their gestures and deeds, especially when the child begins to understand the role of the body in sexuality. If the pudity does have a role or if the little ones have questions to ask, it is best to speak openly about them and keep communication open, which is beneficial to both.