These are difficult questions, to which, unfortunately, no one can give you a better answer than yourself. And this is because a child changes lives in a few different ways. Some parents even say that the decision to have a second child was much more difficult to take than in the case of the first one, because the second time it is not just about having a child, but about changing an entire family.

Having a second baby

There are times when it is 2 times harder, but you should have a second child because life will get 10 times more beautiful.

You should have a second child because the first child helps a lot and it’s not that hard! Financially it is harder and after three years there will be more spending. On the other hand, the beautiful and emotional side of life will get 10 times better.

What the world does not tell you when you try to figure out if you should have a second child is that four is another balance in the family and more than 1 child in the house will teach you many new management and manipulation tricks as an adult.

What people don’t tell you about the second child is that you know that the lives of your children will be paired and they have one another to count on.

Rules and the ideal time for having a second child

If you have already decided, together with your partner, that you want a second child, you can relax, but not for long, because another important decision can be seen on the horizon.

When is the ideal time? It is useless to say that there are no rules on this matter either. Still, the statistics say that on average, the age difference between the first and second child should be about 3-4 years. Of course, the decision is yours, but it would not be bad to consider some aspects examined by specialists.

When is the perfect time to get pregnant with the second child? 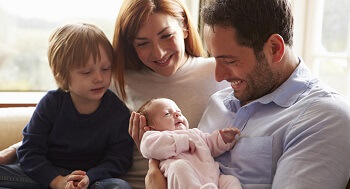 According to recent research published in the Journal of the American Medical Association, the conceiving of a child with a difference of fewer than 18 months or more than 5 years, increases the risk of premature birth or the birth of a smaller-weight child.

When the interval is too small, the problem is related to the need for the mother’s body to recover, and when the distance in time is too large, the risk factor is related to the idea that the fertility of the woman is decreasing as she spans forward after a first birth.

Studies show that babies conceived less than 6 months after the first birth present a 40% higher risk of premature birth, and for those conceived with a difference of more than 10 years doubles in risk. A similar study, conducted at the University of California in San Francisco, showed that it is ideal for a second child to be conceived around 24-35 months after the first.

What do you feel when you think of a new child?

Science certainly cannot dictate the choices we make in our life, especially when they involve love and desire. There are no rules, but there are aspects on which we deserve to meditate, before making any decision.

The age of the mother and the second child

Unfortunately, the age of the mother really matters in such a decision. If you are over 35 years old and want to have two more children, it is a little difficult to afford the luxury of making them at a bigger difference between each other, as the fertility of the woman decreases with her age. But if you are up to 30 years old and you have no fertility problems, you can make your plans much more flexible.

There are many women who jump over to these problems with a particular thought on their age: If they do not do it now it may never happen.

However, up to 40 years old when the chances of becoming a parent are indeed diminishing, the mother’s age should not be a decisive argument. Nor is the age of the first child essential either. It is good, however, that the new pregnancy should not come before the first child reaches 18 months so that the mother has enough time to recover.

But then, if you think about the relationship between brothers, no matter how old they are, there will still be rivalry and love. Their future relationship cannot be planned.

The partner’s opinion on the second child

Making a child certainly involves 2 people. Most of the time the decision to make a child comes from itself in a couple. But, sometimes one of the partners is prepared for this step, while the other is not. Adopt a middle solution that will satisfy both of you. Talk long enough before making a decision and don’t hurry. It is very important that when you do it, you do it with all your heart.

The age of the other child 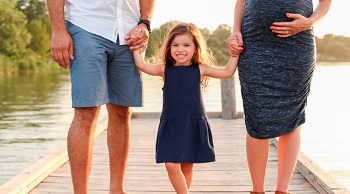 It is a factor to be taken into account, but the choice is certainly subjective. Some parents think it is better to have the second child at a smaller difference because this way they will play together and have a close relationship.

Others, on the contrary, prefer to have the second child at a bigger difference in order to give the first child more time to get all the attention and to make it easier to cope with the parent task themselves. There is also the fear of many parents around how the older child will react, of the false suffering they could cause by redirecting their attention to the small one.

As far as relationships between children and between parents and children are concerned, it seems ideal that the second child should appear either when the first one is under one or when it has already passed 4 years of age.

The explanation is simple: Those under one year old do not have a very developed sense of their own personality yet and will not feel negatively affected by the arrival of a new member in the family. The children over 4 years of age have their own concerns and, moreover, they have had enough time to take full advantage of the exclusive attention of their parents.

The availability to change your lifestyle

If the first child changes your lifestyle in a relatively easy-to-bear way, your second child changes it permanently. Consider the fact that you won’t have a child, but two children with different needs, with personalities asking for different attention, with different problems. So, if you have a certain lifestyle, with various habits, if you have returned to work and you like what you do, the coming of a second child may come with adaptation problems. Are you prepared to give up certain things in favor of others? Because, after all, that’s what it is all about.

Are there any people around you to support you?

The fact that looking back, it doesn’t seem to it was as difficult as you were afraid, doesn’t mean that with a second child it will get any easier for you.

It is true, you have gained a very valuable experience, but it is quite another story to look after two children, not just one. You’ll need help because the first child still needs you. So, consider all the solutions you have – Do you have anyone who can help you? Take into account that you will need it for a long time, not just a few weeks.

The financial situation at the second child

It is certain that money is nothing compared to the desire to have a child, but in the world we live in, it is good to be a bit pragmatic at times. So, it wouldn’t be bad to make some calculations including short-term expenses like pregnancy, birth, needs for your baby’s first year of life, but also long-term expenses like clothes, kindergarten fees, school, etc.

Think of whether you’ll have to return to work earlier, whether you will afford a bona babysitter, etc. That doesn’t mean you have to hire an accountant to make a good decision. Try to be flexible in your plans and optimistic. It matters!

When should you have a second child?

Beyond these realistically-viewed aspects, here are some of the emotional signs that might translate into the fact that you are prepared for a second baby:

Apart from all these aspects, in connection with the decision to have a second child and the ideal time to put this decision into practice, the most important thing is what you feel and want. You will only be ready when you feel in your heart you are. If the first child was a complex decision in your life: Happiness and care, fears and love, new attempts, and many difficulties, the question/dilemma of having a second child, probably has not yet given you a firm answer.